We are testing a Makerbot Replicator2 3D printer. The design tech teacher, Garth and myself have a whole bunch of grade 9’s that are in both his tech course and my science class. They have shown quite an interest in the machine and we plan on putting that interest to work while we are testing it.

So far we have had many successful prints, but have also run into some difficulties. Every so often we get a heating error and have to reboot the machine. We have also had to reinstall the software when a “service error” occurs. Printing objects that have a solid base have worked very well so far. On the other hand, printing objects that have overhanging pieces have not worked wonderfully yet. I think we need to practice those prints.

Garth has put in a ton of effort working with new design software, trouble shooting when the machine acts up and generally testing it continuously. One conversation we had was about how to predict how long a print job will take, so we can schedule prints from various departments. Perhaps calculating the volume of a variety of prints (Archimedes principle) and the time would enable us (or the grade 9 math class) to create a function predicting print time. It does depend on the amount of detail as well though… Any ideas?

I was most surprised by the fact that it doesn’t print solid right through the object. It lays down a grid and then fills in the base and top and sides (all outside edges) completely, but not the inside. 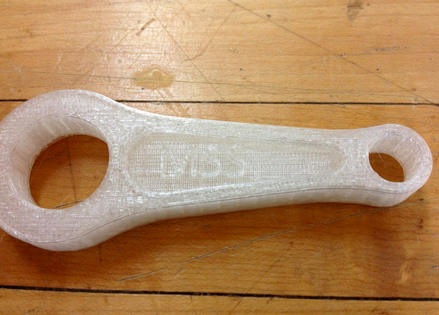 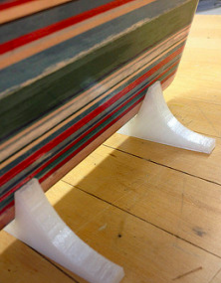 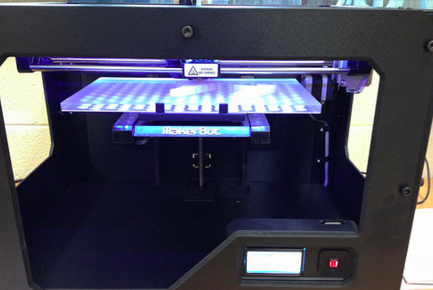 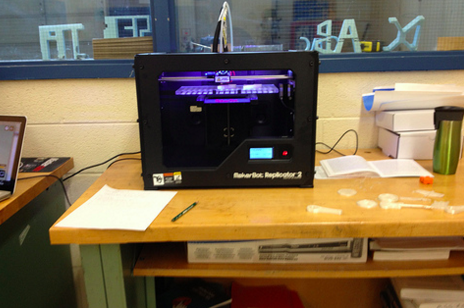 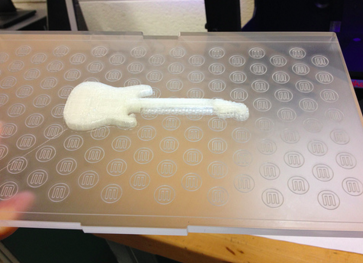 The following post is for my #educ5105 course and was co-written with the amazing Amy Blizzard (@blizz04). It has been cross-posted on her blog, which can be found at http://dramology.wordpress.com/ . I have taken a few courses with Amy now and worked with her on a few projects. Throughout these courses we have had the opportunity to have a few discussions around classroom teaching and I have learned that she is doing some amazing things in her drama classroom! Check out her blog!

Examining Professional Development Through Ely’s Eyes and the TPACK Framework

Gunn and Hollingsworth’s (2013) article, The Implementation and Assessment of a Shared 21st Century Learning Vision:  A District Approach, examines an educational district in Alberta and their shift to alter their teaching to better meet the needs of 21st Century students.  If we broke down the district’s situation by way of Ely’s eight conditions of change, then the board’s desire to implement change started because of number one, dissatisfaction with the status quo (Williams).  No longer was the traditional teaching methodology meeting the needs of the learners.  There was a need for more technological inclusion in classrooms, differentiated instruction, and new forms of assessment in order to teach a relevant 21st Century skill set to modern learners.  As Gunn and Hollingsworth (2013) stated, “Rapid technological changes have increased information availability and have radically improved communication.  The traditional methods of instructing students are no longer effective” (p. 202).

In order for these changes to be implemented, it was obvious to the district powers that the adopters, or teachers, must have sufficient knowledge and skill set to execute the change, thus meeting Ely’s second condition.  Ely’s third condition of change, availability of resources, wasn’t discussed in this article, but based on the questionnaire given to staff and included in the article, computers and internet are available for use, however specific technologies or how shared these resources are was not detailed.  Time, number four on Ely’s list, was adequately given to the adopters.  The article details a 3-year plan to allow for adequate time and training to alleviate anxiety and resistance among the teachers as they move away from traditional teaching approaches (Gunn & Hollingsworth, p. 203).  Within that 3-year structure, a minimum of 8 full professional development days was designated.  At the end of each year, adopters were asked to reflect on their process, how far they’ve come with their integration and how they are feeling, coping etc.  The first two years, time was set-aside during professional development for that necessary reflection.

No specific reward or incentive was given directly, which is number five on Ely’s list.  However, as this was a district-wide goal, the incentive appears to be that everyone was tackling this change head on therefore; an incentive to keep up was created.  For many, the incentive was also to better their practice, making it more relevant.  The teachers reported “significant growth in perceptions and adoptions of software tools, pedagogies, communications methods and usages” which reads as reward to me (Gunn & Hollingsworth, p. 214).  The adoptees were active participants in the process primarily through survey feedback and discussion.  Therefore, Ely’s sixth condition of participation was checked off along with number seven, commitment as leaders in the change process had to buy into it.  Gunn and Hollingsworth (2013) discussed how the district incorporated both macro-level facilitation leadership (supplying the money and training) and micro-level leadership (the teachers themselves) (p. 213).  There was mutual support between the two leadership levels, which allowed all adopters to feel invested.

There was strong leadership throughout the process, for example people at all levels within the district formed an advisory committee and they offered encouragement to other adoptees.  As Gunn and Hollingsworth (2013) state, “any school district willing to undergo such a project must be willing to commit time and monies exclusively designated for the upgrading of information and communications technologies.  They must be willing to provide significant systematic support for pedagogical change” (p. 215).  This district did just that, providing strong leadership from the beginning, meeting Ely’s eighth condition.  According to Gunn and Hollingsworth (2013), the changes that this district was working towards were fairly successful thus far, but of course work on teaching to the 21st Century learner is ongoing.

In fact, it was found that the 2008 district white paper referred to in Gunn and Hollingworth’s (2013) article (p. 205) was revised in June 2012 to update  their vision. It was refreshed by the same advisory committee referred to in the article (p. 205). The project continues to focus on both pedagogical and technological knowledge.

The Lethbridge SD #51 openly shared their application for the educational research grant, which funded the research project reported on in this article (Barry, 2008). If all professional development was conducted as outlined in this application, evidence of two of the three components of the TPACK framework were directly targeted through professional development, while the third component was at least partially and indirectly addressed.

The TPACK framework is used to explain how a teachers technological knowledge, content knowledge and pedagogical knowledge all intersect to enable the effective implementation of educational technology (Koehler & Mishra, 2009). By simply addressing the necessity for three distinct, yet integrating areas of knowledge, it fails to address the motivation required for adoption of technology. The dotted line circle around the framework implies the importance of context. The model of professional development used by Lethbridge SD #51 appears to have taken this necessity for context into consideration. 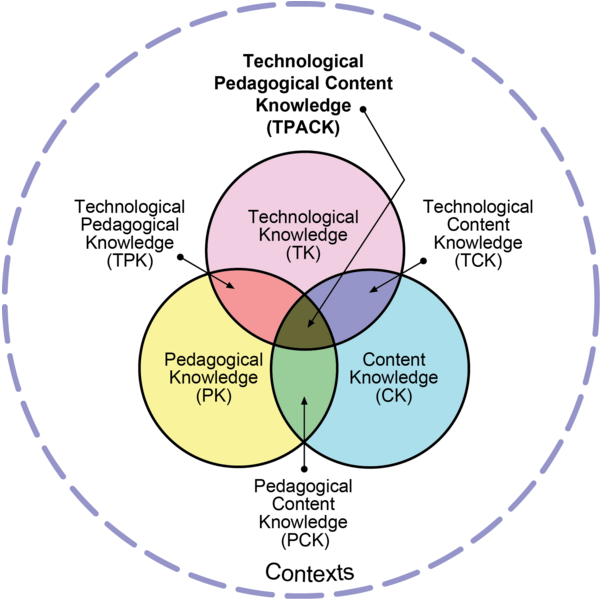 Reproduced by permission of the publisher, © 2012 by tpack.org

The professional development plan outlined 8 full days for a team of central (school district) administrators, school administrators and school lead teachers throughout two-years that focused on pedagogical knowledge (Barry, 2008). This ensured that each school had trained administrators and lead teachers available to support school-based professional development while also ensuring the push for a common vision among central board and school-based staff was upheld. A second layer to their professional development strategy included school-based and centrally hosted workshops around effective use of specific technologies (Barry, 2008). This combination of strategies appears to directly support both the pedagogical knowledge and technical knowledge required by teachers to effectively integrate educational technologies according to the TPACK framework.

Indirectly, the school-based professional development and professional learning teams are referred to throughout the grant application, but not directly supported through this specific research project. This eludes to some support to both the content knowledge and the need for working within appropriate contexts for individual schools. If school-based learning teams are designed around subject areas or grade-based teams, then the development and ongoing support for content knowledge will be present. In addition, the provision of flexibility for schools to run some school-based professional development as they saw fit, while perhaps making extracting reliable data more difficult for the researchers (p.214), allowed for individual school contexts to be acknowledged and supported.

Through the eyes of the TPACK framework, this professional development plan likely supported the development of both pedagogical and technological knowledge fairly well and consistently across the district. The specifics on how the content knowledge was developed or sustained and how individual school, subject area or grade level contexts were supported is still unknown.

In conclusion, while neither of these frameworks (Ely’s Conditions of Change or TPACK) can explain the entire situation or success documented by researchers, they can provide us with a lens to critically examine the change. It appears as though the strengths of the integration of technology in this case included; time, strong leadership, strong vision and a focus on both pedagogical and technological knowledge development.

I may have access to a 3D Printer for a bit. I’d like to design some “design problems” that line-up with our curriculum in my Grade 12 Workplace (SNC4E) science class. Here is an overview of 3D Printing.

Our units of study in Grade 12 Science include:

Looking through the curriculum, here are some problems that I have thought of that will hopefully lead students to cover many of the curriculum expectations while designing a product or product improvement;

Do you have any other ideas? Have you used a 3D Printer in your school?