Last week I had the honor of working with a few teachers (Marci Duncan @marcedun and Michele McGuires @3kidzmum) on a math lesson. These two teachers work on opposite sides of the district and co-planned their lesson by adobe connect and skype and then co-taught their lesson using Polycom video conferencing equipment and an assortment of other tools.

In the past they’ve done really neat lessons including one where students studied the devastation in Haiti, then created 2-D plans for rebuilding 8 buildings for a new village in Haiti. The students did this in groups with students from the other class using Adobe Connect. After planning their buildings (sketches) collaboratively the grade 6 class created diagrams on isometric dot paper of the buildings and then created the layout (birds eye view) of the village. These drawings were shared with partners in the other class using Taking IT Global Education (TIGed.org). Team members in the grade 4/5 class then created the nets for the buildings and had to actually build the village based on the to scale drawings made by the grade 6s. At the end the groups shared their final products using the Polycom video conferencing equipment. Pretty fascinating! 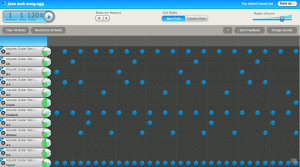 In their Adobe Connect rooms they determined the characteristics that their pattern music would have (number of beats per measure, tempo, if it was a growing, shrinking or repeating pattern). Then the groups went to create music using aviaryeducation.com on their own. So, one pair in each class was going to create music that would be different but have the same basic characteristics. After creating their music, students went to their partners music (shared via aviaryeducation.com), listened to it and looked at it then made a comment describing the pattern using math talk. An extension activity included a discussion forum where students compare their pattern to their partners and describe the similarities and differences.The classes were brought back together via Polycom at the end of the period to share some of the patterns and comments created and consolidate the math.

There were a whole host of adults in the room for this lesson and video cameras going, so we were all a bit nervous about potential things that could go wrong. In the end, the lesson went very smoothly. Below are some examples of the music students can create using aviaryeducation.com. There are also images of what the music creator looks like and how they created the patterns.

The one tiny glitch that happened was that as we were doing the activity, the beta version program was changing! All of a sudden new buttons were showing up, new layouts, new links, etc. Students would save their work one way, but then had the figure out how to save it again the next minute because it had changed. As this started happening we cringed and hoped that no one would notice. And guess what? No adults watching did…. (until we told them). This is because these particular students who 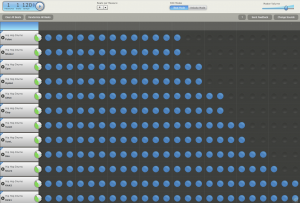 have been participating in lessons like this all year have learned that sometimes technology works and sometimes you need to problem solve (a lot) when it doesn’t. During one lesson the Polycom wasn’t working and then the sound card on a laptop wouldn’t work to use Adobe Connect and so we ended up sharing a screen on Adobe Connect with no visual of each class and did the audio part of the lesson across two iPhones plugged into speakers and on a skype call. Students have watched and participated in enough problem solving over the year that they just rolled with the beta software changes (even with the stress of video cameras and strange adults in the room). The skills developed to respond this way when things don’t go as planned are almost as critical as the actual math (perhaps even more so???).

2 Replies to “Music in Math, Patterning”